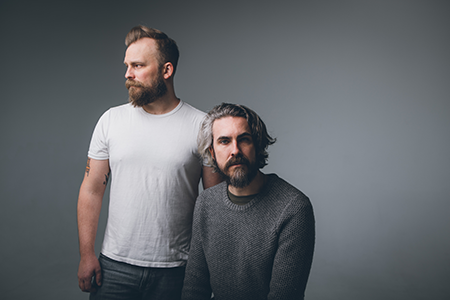 The Bros. Landreth welcome a new day with Come Morning, an album that marks both a rebirth and refinement of the JUNO-winning band's blend of North American roots music and harmony-heavy soul.

The most immersive, emotive record of the Landreths' career, Come Morning finds brothers Joey and Dave lacing their melody-driven songs with layers of atmospheric synth, organ, and textured guitar. The group's previous albums shone a light on their strength as a live act, capturing the spontaneity and sonic stomp of a band of hard-touring road warriors. If those records unfolded like snapshots of The Bros. Landreth's nighttime shows, then Come Morning sketches a markedly different picture, showcasing the introspection and clarity that comes with a long period of rest.
For Joey and Dave, rest wasn't always an easy thing to find. After pursuing separate careers as sidemen, they launched The Bros. Landreth with 2013's Let It Lie, a debut album that drew upon the shared soundtrack of their childhood — Bonnie Raitt's blues, Little Feat's funky country-rock, Ry Cooder's eclectic instrumentals, Lyle Lovett's twangy traditionalism — for a sound that saluted the past while planting its flag firmly in the present. Let It Lie was a hit on both sides of the Atlantic, winning the 2015 JUNO Award for "Roots & Traditional Album Of The Year - Group," earning The Bros. Landreth a nomination for "International Artist of the Year" at the 2016 UK Americana Music Awards, and receiving praise from heroes like Bonnie Raitt. Years of near-constant touring in support of its release left the brothers exhausted, however, and the band took a three-year break before regrouping for 2019's '87.

When the Covid-19 pandemic brought '87's accompanying tour to a halt, Joey and Dave began recording a new batch of songs in near-seclusion, pulling long hours in the studio and building songs one instrument at a time. They layered, experimented, and twisted sounds into something new, working alongside longtime co-producer Murray Pulver and a small group of guests. What emerged from those sessions was Come Morning: a transportive album built for the heart, the head, and the headphones.
Photo Credit: BNB Studios
boxoffice@markethall.org