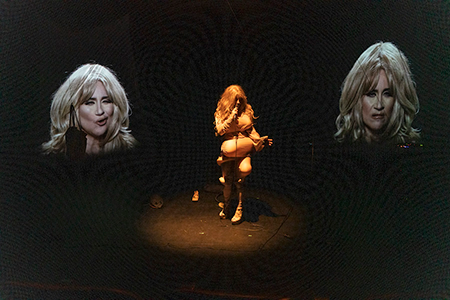 The second show in Public Energy’s Market Hall season is the hard-hitting OUFF from Montreal transdisciplinary artist Alexis O'Hara. Tackling themes of white privilege, late capitalism and perimenopause with humour and a disconcerting honesty, O’Hara and her collaborator/designer Atom Cianfarani have created a true spectacle in which a solitary but fragmented femme negotiates her role, as victim and victor, pawn and princess in a commodity-crazed-brink-of-collapse world propped up by the violent dominance of whiteness. "Set in an unsafe place between satire, observational comedy, and scathing social commentary, OUFF makes us laugh, contemplate and cringe a little as an audience, not quite sure we're in on the joke or even want to hear the kernels of truth that make it work." - Robyn Fadden writing for the culture website Bible Urbaine. Alexis O’Hara has toured internationally with performances that comprise elements of cabaret, pop music, spoken-word, stand-up comedy, vocals and electronics, drag, photography and installation.
boxoffice@markethall.org