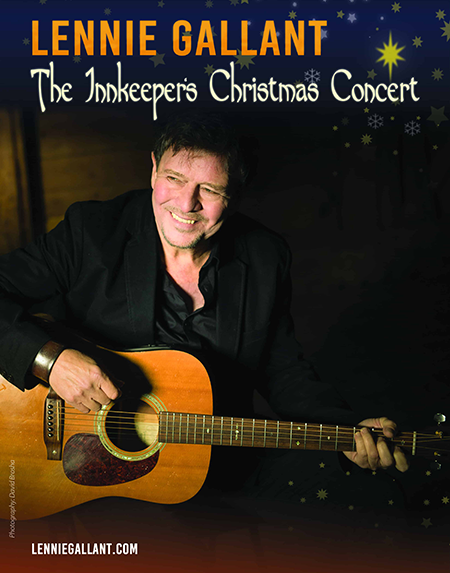 Presented by Folk Under The Clock

Lennie Gallant’s Christmas concert is named after the artist’s much loved Christmas song, ‘The Innkeeper’’. The song is a redemption story told from the point of view of the innkeeper who turns the anointed couple away in their hour of need in the original nativity tale.

This multimedia concert, will feature photos and projected paintings by his famous artist sister Karen Gallant. It will feature original Christmas songs penned by the prolific artist for a new Christmas album, ‘Christmas Day on Planet Earth’, a song he recorded with Black Umfolosi from Zimbabwe, as well as some songs from his latest album, Time Travel, and his new Francophone project with Patricia Richard, Sirène et Matelot.
His band is composed of Patricia Richard, Julien Robichaud and Keelin Wedge.  The Market Hall is the perfect setting for this intimate concert that promises to be a special celebration of Christmas as well as a showcase for exciting new songs. Christmas on Prince Edward Island has always been a big part of Lennie’s experience, and he says he has a few surprises in store for what will be a night to remember.

Lennie Gallant has released fourteen albums, including four in French, of original songs which have won him a host of awards and nominations from the JUNOs, Les Prix Eloizes, as well as 19 East Coast Music Awards, including 2017 ECMA Entertainer of the Year. His songs have been recorded by Jimmy Buffet, The Rankins and Opera star Measha Bruggergosman. His double CD from his multimedia hit production, Searching For Abegweit, which ran for 173 shows, plus more shows this past summer, also won him a 2017 ECMA. He was named Canadian Folk Artist of The Year and his song Peter’s Dream was voted one of the Top Ten East Coast Songs of All Time and was inducted in the Canadian Songwriters Hall of Fame.