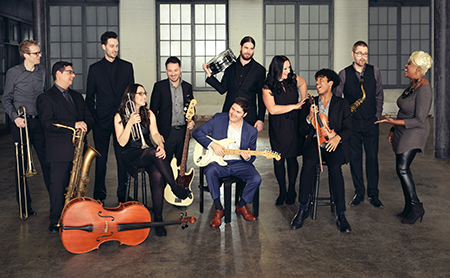 From a small town in Northern Ontario to lively crowds across England and Wales, André Bisson has proved that he has a message worth listening to. With a career that spans over 20 years, his musical resume includes 9 studio albums, countless awards, and sold out shows across Canada, US, UK, and Europe.

As the sole songwriter and arranger for a group of 9 musicians, André has created his own musical brand infused with soul, roots, blues, and R&B. Using an eclectic combination of instruments, he creates a musical story that becomes the soundtrack for his lyrics.
Since first taking to the stage at age 15, André’s love and dedication has always been to the live show. Combining his powerhouse vocals with a group of world class musicians, André makes it a priority to always give the audience an exciting, intense, and memorable musical experience. The connection between the musicians, the song, and the audience is always the ultimate goal.
Throughout the years, André’s style and philosophy towards music has attracted attention in the music community. Since his first album release in 2009, Andre has gained notoriety with awards such as “Male Vocalist of the Year” - Hamilton Blues Awards, “Song of the Year” - Blues and Roots Radio, and a four time nominee at the Hamilton Arts Awards. André was also selected by the Grand River Blues Society to compete at the International Blues Challenge in Memphis, Tennessee.

With a dedication to the live show and a sound that is constantly growing and evolving, each performance is unique in its own way. It is these qualities that keep the audience engaged, excited and returning time and time again.
boxoffice@markethall.org