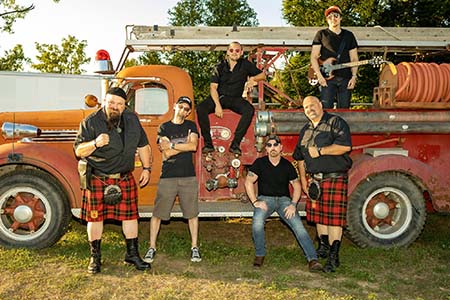 Always entertaining and definitely unique, the Mudmen are a blast of Celtic energy whose members are known to be characters both on and off the stage. Enjoy an all-ages evening of Celtic music & stories from Canada's Celtic Rock Warriors. First discovered in 1993 as the Campbell Brothers Sandy & Rob signed a record deal with EMI Records changing their name to Mudmen in 1998.

In 2008 local Sandy & Rob Campbell performed on the new Hockey Night in Canada hockey anthem produced by Rock Icon Bob Rock where Ron MacLean said televised "Mudmen we love'em". This led to many opportunities including a 3-month tour with Johnny Reid where The Campbell Brothers were featured on his dvd,his PBS special with a performance at the Canadian Country Music Awards.

With 10 CDs, over 3000 shows to date, festivals and concert performance in 7 countries Mudmen are building a Legion of fans from young to old. Sandy Campbell, Robby Campbell, Colin Amey, Jordon Brosseau, Alex Showdra and Andy Gingerich believe that nice guys can finish first while enjoying life and what you do translating to audiences.